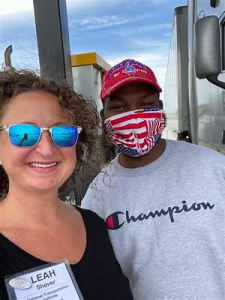 One of the few positives to result from the COVID-19 National Emergency has been the realization across the United States of the critical role that professional drivers hold in keeping the store shelves stocked with the items needed for everyday life. Leah Shaver, the President & CEO of the National Transportation Institute (NTI), has spent her entire career in the trucking industry, and she has devoted nearly 20 years advocating for professional drivers.

A few weeks ago, Leah had begun developing an effort to recognize the mile-by-mile heroics of the men and women behind the wheel. In addition to leading NTI, Leah is also a SiriusXM host on Road Dog Trucking Radio, a member of the Women In Trucking Association Board of Directors.

The idea of the Sunshine Tour first came to Leah when she and her husband, Mark, began mapping out their annual trip to their home in Minnesota after spending the winter in Florida. Mark, another veteran of the trucking industry and the Chief Operating Officer of NTI, shares Leah’s deep appreciation for the dedication and commitment of professional drivers. As Leah and Mark considered the route home amid the COVID-19 National Emergency, they thought deeper about the challenges professional drivers have been facing in this new age of social distancing.

In her duties as a host on Road Dog Trucking Radio, Leah had been taking calls from company drivers, owner-operators and independent contractors who were all sharing their experiences as the country was going into a sheltering mode. The trip back to Minnesota provided Leah and Mark with an opportunity to not only say thank you in person, but to demonstrate their appreciation for the heroic work of keeping the supply chain moving with the products our nation most needed at this time.

Mark suggested that they visit truck stops rather than gas stations to provide them with the most direct way to thank drivers in person. Her would-be CB handle on Road Dog is “The Sunshine Girl,” and she decided to call their trip home the Sunshine Tour in the hopes of brightening the days of the professional drivers along the way. Leah and Mark thought about making a care package to go with the letter that could speak to their appreciation for the work professional drivers are doing at this time and throughout their careers on the road.

“We would love to be able to buy them a meal, but we knew that restaurants were closed. The best answer we could come up with was to just put some cash in an envelope,” said Leah before further explaining the significance of honoring someone with a meal. “When you prepare a meal, you’re gathering together and you’re able to enjoy it together. It is an expression of gratitude or affection when you do that for people. And so symbolically, we though cash would be a good alternative, as they might be able to get meals for a few days.”

Leah had decided to dedicate earnings from her SiriusXM work to the cash fund, and she also directed NTI to make a contribution. About a week prior to making the trip, Leah shared what she was preparing to do with Jeff Tacker, the Chief Operating Officer of Expediter Services, a consulting customer.

“We loved the plan that Leah had developed to personally thank and honor professional drivers. We immediately asked if ES could become involved in the Sunshine Tour,” said Jeff. “At ES, we believe that you should never stand alone as a driver, contractor or owner-operator. This industry is very rewarding, but it can also challenge you. And through the Sunshine Tour, Leah and Mark took the time as they traveled the country to show professional drivers that they were not only in support of them, but that they would be standing with them. Everyone at ES is grateful that Leah and Mark, in sharing our care packages during their stops, gave our company the opportunity to stand with the drivers they met during the Sunshine Tour.”

ES put together a care package for Leah to distribute that included hand sanitizer, masks, $50 in cash and a personal note from Jeff on behalf of the company and the ES Community.

Prior to heading out, Leah used her social media channels to engage drivers about the tour and to promote the trip. She also decorated her car with some eye-catching, hand-painted designs. On the back window of the car, there was a large “Thank You Truckers” with images of the sun on both sides of the message.

At first, some of the drivers that Leah and Mark met during their initial stops were a bit hesitant to have strangers approach them, even at a proper social distance for the times. However, once the drivers learned the details about the Sunshine Tour, the conversations became much easier.

“One of things that really stood out to me in the beginning was that people were so taken aback when I approached them grinning ear to ear. With some of the first people we met, it was evident that they were expecting the negative because that’s been the norm for professional drivers and how they have experienced the public viewing them,” Leah noted. “When they did realize that my intentions were good and they heard me say, ‘Thank You,’ most everyone that I met was extremely flattered. And over and over, I heard drivers say, ‘I can’t believe someone would thank me for just doing my job.’”

As part of the planned trip, Leah and Mark had an extended stop in Nashville, where they stayed with fellow Road Dog Trucking Radio host KC Phillips and his wife. KC now broadcasts Road Dog Live from his house as part of SiriusXM’s steps to keep its staff safe during COVID-19. Leah, who is a regular on KC’s Road Dog Live show with Pay Day, joined KC on the air while she was in Nashville. Thanks to a conversation with Mark, KC asked Leah about the details of the Sunshine Tour, and that on-air moment helped to put a spotlight on the overall effort.

“I didn’t know that Mark had talked to KC about what I had put together to give away to drivers. And when he asked me to co-host with him during the tour, he outed me on the radio,” said Leah, who had wanted to take a humble approach to the tour. “Now, drivers knew that I was doing the tour, and that I was doing a giveaway. I blushed so red when KC asked me about it. I was so embarrassed. I did not know he was going to do that.”

Looking back, the moment that KC put Leah on the spot became a turning point of sorts for the tour as Leah discovered when she and Mark left Nashville. During one of their first stops following their Nashville stay and her time with KC on Road Dog Live, Leah met a driver in the fuel island. To make her introductions a little easier, Leah had begun wearing her name tag from NTI.

“I introduced myself to this gentleman whose name is Tahoe. And as soon as I said my name, Tahoe just got so excited and he goes, ‘You’re that girl…you’re thanking drivers…you’re that girl.’ “Well, Tahoe ended up calling into Sirius XM that day and telling KC on the air that he had run into me. Tahoe just said such lovely things about what it did for his day,” explained Leah. “As embarrassed as I was when KC outed me on the air about what I was doing with the Sunshine Tour, it was wonderful hearing Tahoe talk about how impactful it was to meet me and to have me thank him for what he’s doing, to have someone just be grateful and nice to him. Tahoe did post a picture of us on my Facebook page, but the things that he said on the radio were genuine in talking about how it had impacted him so greatly. That was awesome.”

As the Sunshine Tour moved north, reaching its end in Minnesota, Leah and Mark had a number of other rewarding experiences during their stops. In addition to the memories of new friends they made along their trip, Leah and Mark now shared an even stronger connection with men and women who have chosen to dedicate themselves to the road as professional drivers. In taking the time to give back to the heroes of the highways, Leah and Mark brought home their own collection of gifts through the Sunshine Tour.

“Giving back in any way is very rewarding. I didn’t feel like this was work, certainly. Drivers feel heard by being appreciated. It’s really important to a professional driver to be listened to, to be able to contribute to an idea and to a conversation,” said Leah. “The drivers we spent time with on the Sunshine tour were so immensely grateful, and sharing that experience with them made me feel even more grateful. Then you add in the fact that ES would want to contribute means that, exponentially, it allowed this effort from my small business the opportunity to make an even greater impact. I can’t say enough having the support of ES and the ES Community as we were visiting with drivers.

“I’ve spent my entire career serving professional drivers in some capacity. And one of the things that has been the most special for me, in working at Sirius XM, is that drivers who hear me on the radio understand that I’m a strong supporter of trucking and truck drivers,” expressed Leah. “I always work to listen to drivers. I try my best to be knowledgeable, and I try to I entertain them. If I can be engaging and entertaining on the radio, I know that helps the time go by a little faster, and it can allow them to forget about other things as they listen. Through the Sunshine Tour, I hope the professional drivers out there could see that I’m supporting trucking and they feel supported themselves. Sharing this experience with professional drivers was so rewarding. For me, it certainly is a whole lot more gratifying when you can say thank you in person in addition to over the phone or the radio.”