Thanking Women Who Paved The Way In Trucking History 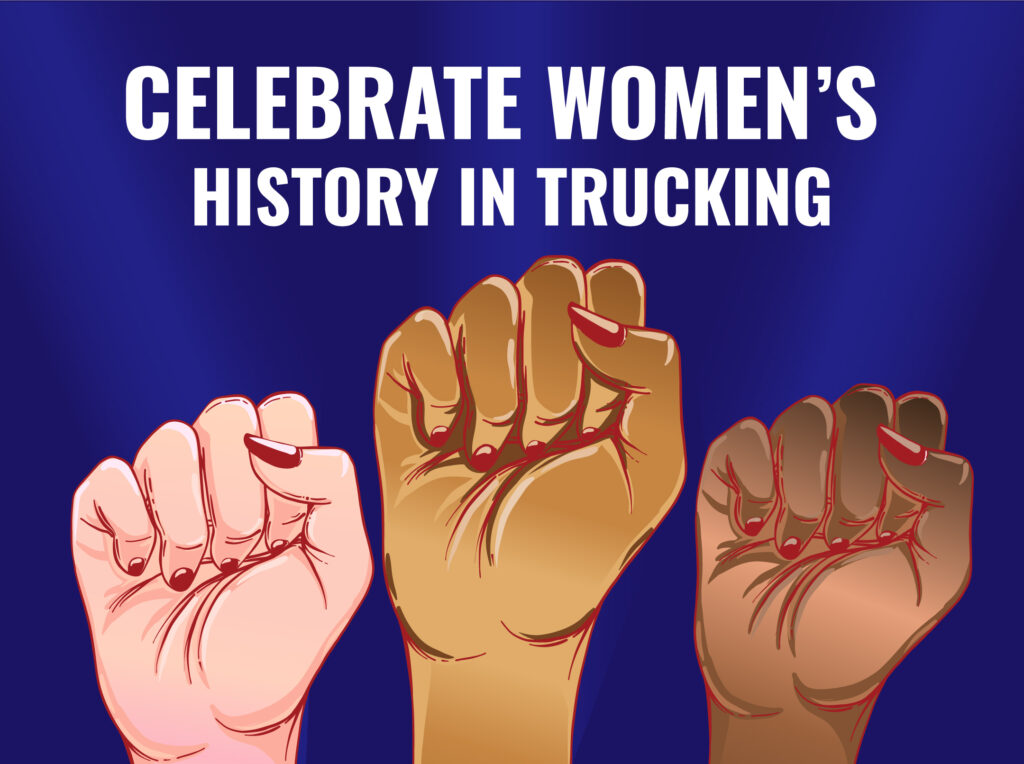 Across today’s trucking industry, there are more women earning a living driving a truck, working phone lines as a recruiter, guiding dispatch and back-office operations, and sitting in board rooms in executive roles than at any point in trucking history.

The quest for equality in trucking – that is, when the share of women behind the wheel and in leadership positions matches that of male colleagues — is still a work in progress, of course, as are the efforts to create a trucking industry that’s safer for women and offers more robust support structures for a greater female workforce.

However, The National Transportation Institute sees Women’s History Month, celebrated each March, as a chance to reflect upon the progress made over the past two decades by highlighting a few of the women who have paved the way for those working in today’s industry, as well as the generation entering the industry tomorrow.

A driving component amongst all of the women highlighted below is the work and dedication it took to achieve their accomplishments – and to persist in that hard work until they did.

This is by no means an exhaustive list of all who’ve helped forge the way for women to excel in trucking, but rather a representative list who embody the doers of their day.

There are the truly historical figures like Mary Fields, AKA Stagecoach Mary, who was born a slave in Tennessee in the 1830s but then became a famed gun-toting mail carrier in Montana after the Civil War. While she didn’t drive a truck, per se, Stagecoach Mary was a doer in her day, showing the strength and resilience of women working in critical transportation roles as early as the late 1800s.

There are of course the outstanding leaders in today’s industry, like the legendary Ellen Voie, founder and president of Women In Trucking Association, and newcomer Lindsey Trent, president and co-founder of the Next Generation in Trucking Association, which aims to promote trucking as a positive career choice for high-school graduates. Ellen and Lindsey, nearly 15 years apart, saw a gap in the industry, and sought to close that gap with mission-driven action and organization.

Women In Trucking has played – and still plays – a vital role in engaging motor carriers to implement policies and reforms that promote gender diversity at a micro, company level, and at a broader macro level. WIT’s other missions are to celebrate the accomplishments of women in our industry, provide support to women in roles across the industry, and develop a network of mentorship and ambassador programs to promote careers in trucking. The work Ellen has done to accomplish those goals over the past 16 years can’t be overstated. She’s a true pioneer in this industry.

The Next Generation in Trucking group aims to build on the momentum and expand trucking’s career opportunities by engaging teenagers at the high-school level offering curriculum nationwide while promoting essential and profitable careers. Lindsey founded NextGen in 2021, filling a vital need she saw in the trucking industry after spending a decade at a third-party CDL staffing firm and at Ryder.

Ramona Hood, president and CEO of FedEx Custom Critical, has bridged three generations in trucking. She started as a receptionist at FedEx in 1991, and over a 30-year career worked her way up through 10 different positions before being named the company’s Chief Executive Officer in 2020. She’s shaped the culture across the FedEx organization by embracing challenges and transforming them into opportunities. She’s one of the most celebrated leaders in our industry, earning numerous recognitions and awards both from business groups and transportation organizations. She’s also known for implementing “Ramona Roundtables” — a forum for drivers and other FedEx personnel to provide honest feedback and open discussion meant to drive forward the company’s culture.

Sherri Garner Brumbaugh, likewise, is an action-focused leader of the present. She grew up in a trucking family and ultimately took over the family business, Garner Trucking, in the mid-00s. She transitioned the business into one of the most innovative motor carriers in the country, primarily built around a driver-first focus for management. She also rose to the highest ranks in the American Trucking Associations, the industry’s powerful lobby in Washington, D.C., serving as ATA Chair in the 2020-2021 term — and only the second female Chair in ATA’s history.

Another leader and doer of the present is NTI’s own President and CEO, Leah Shaver. She began her career as a driver recruiter in her early 20s. She rose through the ranks over 14 years managing human resources, recruiting and retention at a multi-platform truckload carrier before joining The National Transportation Institute in 2015. She acquired the company from its founder in 2020, propelling the research and data firm to be one of the most effective and utilized tools for motor carriers and analysts to track trends, innovative compensation strategies and personnel policies, and a slew of other data and stories that help shape carrier-driver relationships. She’s also served three consecutive terms as an officer on the Board of Directors at the Women In Trucking Association, where she’s pressed WIT’s core goals — greater access to trucking careers for women and meaningful mentorship programs.

Lastly, of course, there are the thousands, if not millions, of women working today in trucking who will help realize the goal of equality behind the wheel, in boardrooms, and in the C-Suite. Rachel Lovell, Vice President of People Operations at Ascend, a 650-driver fleet in Jackson, Tennessee, represents that future as she unabashedly encourages her industry peers while tirelessly leading her team. Sondra Freeman, head of Diversity, Equity, and Inclusion at Trimac Transportation also represents trucking’s tomorrow — while today playing a critical role in her fleet and in the industry at large.

NTI celebrates not only these women, but all women making trucking history, for their work, dedication, and courage, and invites everyone in the industry to recognize their achievements this Women’s History Month.